We entered our first Professional competition in December of 2016 (they were judged in Feb 2017).  We had been in business since 2009 and looking back now I have images that were good enough to be contenders for awards back in 2012 but it didn’t cross my mind to enter back then.  Why didn’t we enter before 2016?  A mix of the following;

-Fear of failure (and being totally embarrassed in the process)

-Money! (Entering these competitions is NOT a cheap exercise)

-Ignorance . . didn’t know about/understand how much i would enjoy the process of being judged (sounds weird doesn’t it), or how much it would positively affect my personal photography journey

So, back to December 2016.  I had read an inspirational business blog that listed how many times Walt Disney’s Disneyland proposal was knocked back before it was finally funded (something crazy like 300 times) and that Oprah was fired from her news anchor job for getting too emotionally involved to her stories before she became a household name.  The same article talked about the philosophy of getting as many of the mistakes/setbacks/failures out of the way as quickly as possible so you get to the good stuff sooner  – so i thought F*^k it – Lets fall down more!

The timing was right to enter the awards run by Wedding and Portrait Photographers International.  Known as one of the most prestigious Print Competitions in the world I figured we may as well go big or go home!  I had just finished shooting for Tails Of Perth so had a huge catalogue of images to choose from but after some advice from those more experienced in the competition world, we settled on 6 images that were: A) a little bit different, B) Clean (no messy or distracting backgrounds) and C) my favourites.  No matter how the award process were to go, I only ever wanted to enter images that I LOVE creating – no matter how high or low they scored.

For any other pet photographers out there (or baby and children photographers for that matter) i think it’s really important to note that no ‘difficulty’ allowance is given to us for having subjects that don’t understand fluent English . . . I wish I could say that for Warren’s tree portrait below, I simply said to him “Ok Buddy – I need you to sit just past the edge of the furthest branch  and look as serious as you can until i nail the shot ok – then I’ll give you the cheese, cool?” “Woof” – sweet!  <man, how fast my shoots would go haha>.  You’ll all know the actual story went more like this:  “Caitlyn, please pop him in this spot, stand to his left and ask him to stay while I make some funny noises so he looks at me” . . click click click, *Warren runs towards a good smell and we have to reset*.  This continues for 10 minutes – standard Pet Photography model behavior!  It’s more like: you choose to work with the furry cute models that don’t know how to pout on cue, so you keep up with what all the others are doing if you want to contend!” (and I love that!).  For me, the extra challenge that comes with photographing Dogs (cats, horses, birds) is so worth the puppy cuddles, poop and sand in the eye fun that comes with every shoot we do!

We were so excited to find out we had won silver awards for 4 of the images we entered!  These were our very first four awarded images: 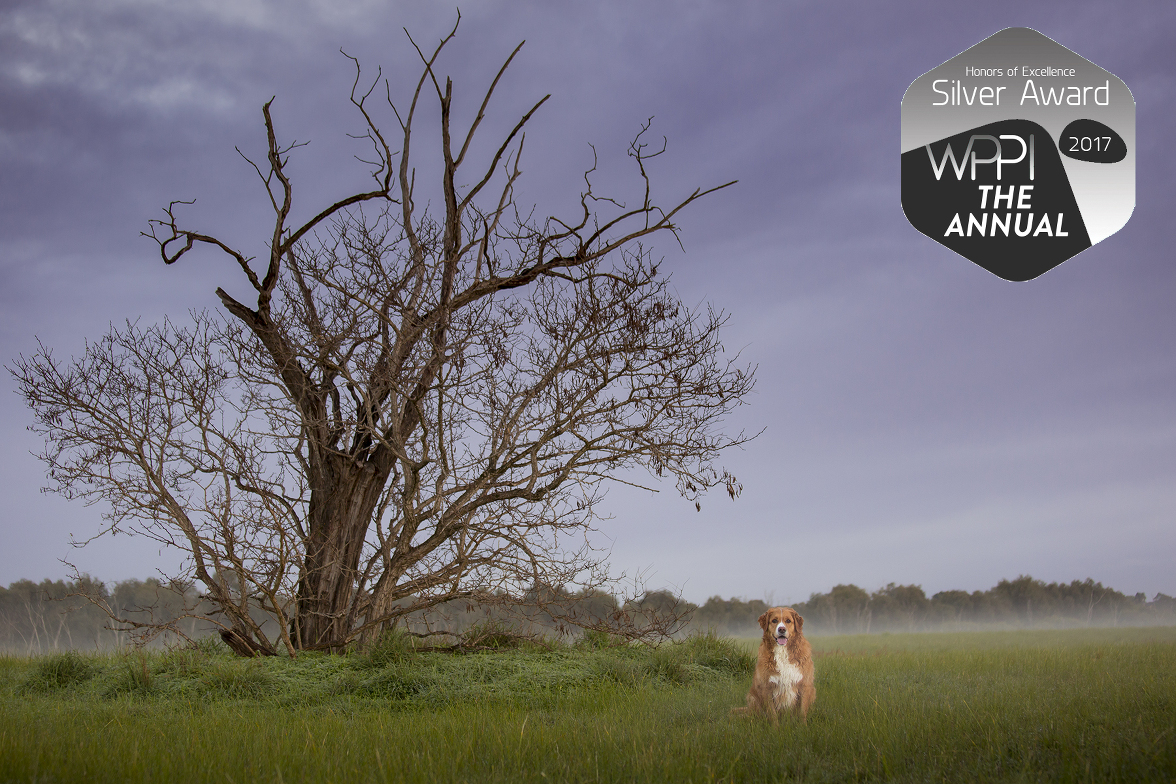 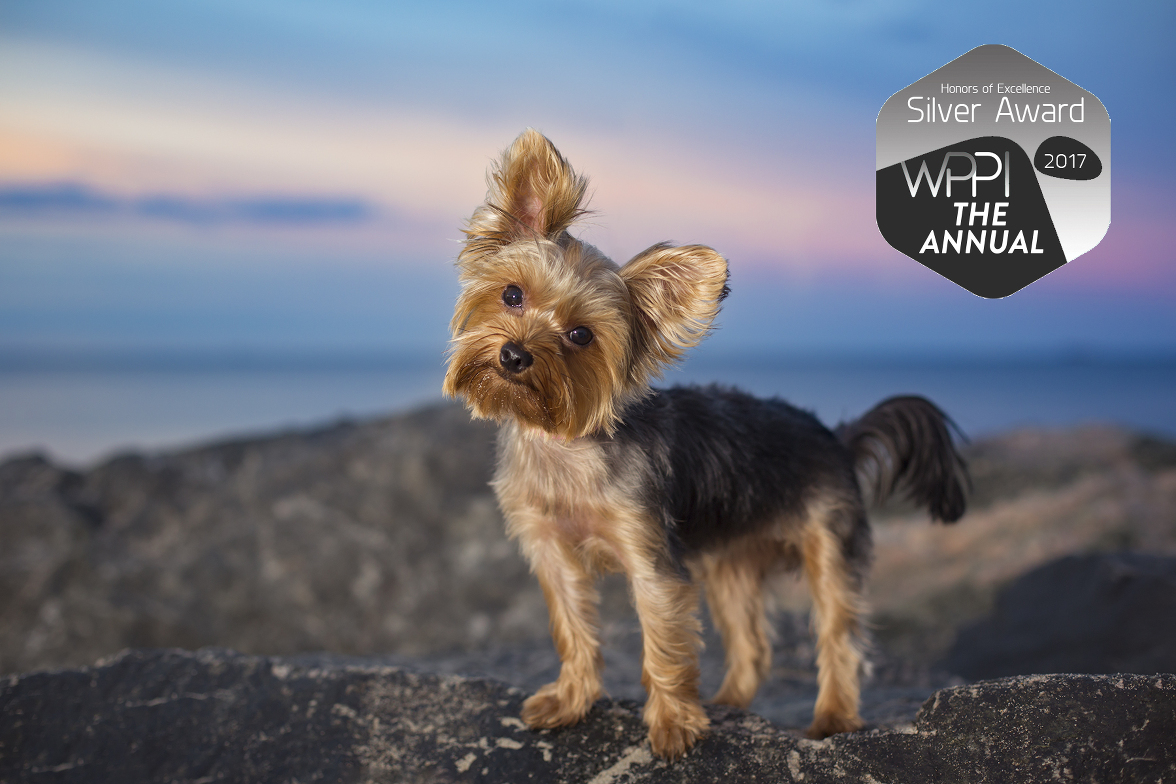 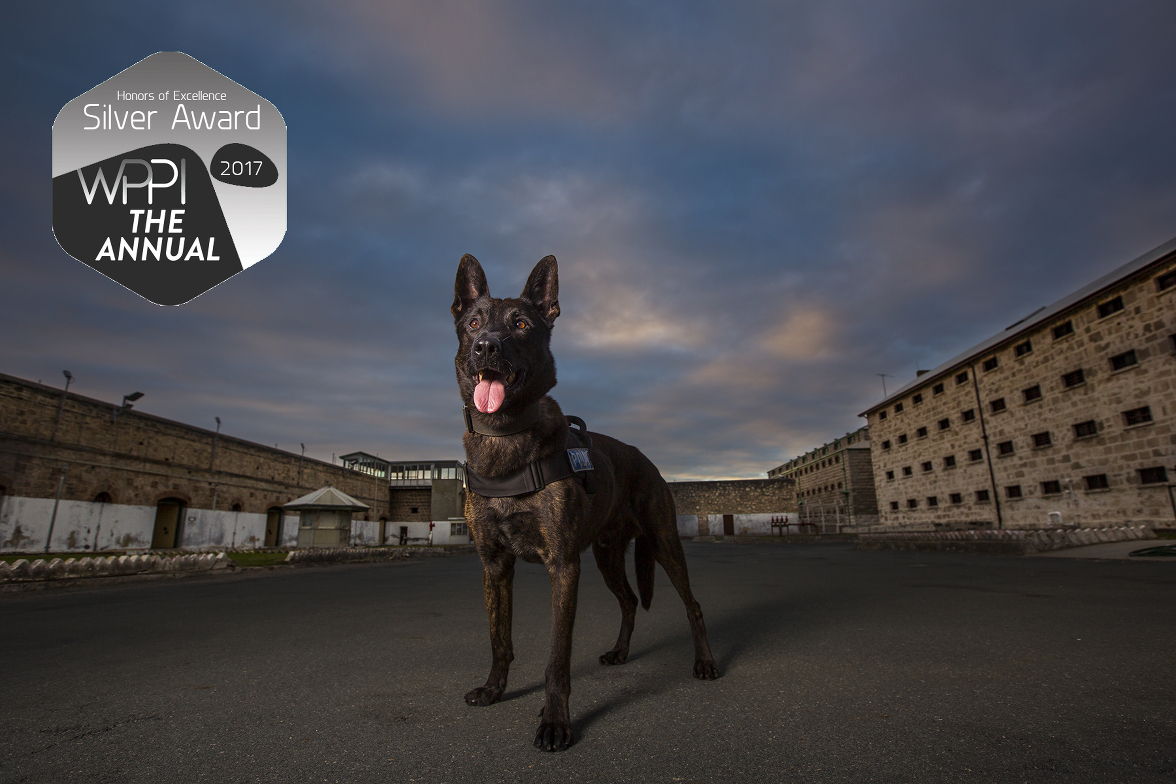 So exciting – we were thrilled!  We entered the same 4 images into our State Professional Awards later that year and earned another silver award for each of the above photos too!  We’ve now won 13 awards and are off to the National Awards in a few weeks time (wish us luck!).

I absolutely love hearing the judges comments every time (and I love that I’m learning to predict what the comments will be).  I love that it makes me think more about the images I’m creating and I love how much time I get to spend working with Jersey and Sailor to test out new ideas every time the awards come around.  It has made me think more creatively which is invaluable as an artist!

Here’s the 2 images that missed out (you need a score of at least 80 points to gain a Silver Award, the two below missed out by 2 and 3 tiny points!).  It’s important to note that to gain 80 or above, the judges must feel that the image is “above standard professional practice”.  They are instructed to only score an image 80 or higher if the image shows “above average skill and technique in most areas”.  They are also (more than anything) looking for a narrative.  They want to be emotionally drawn in to the image and the story behind it.

Here’s why I say I don’t want you to hire me for my awards.

The two images below are by far the most emotional and meaningful images in the set.  I can already hear the judges saying “SHOW us the story then” but here’s the thing.  I’m a Pet Photographer whose main aim with every shoot I do is to give my clients images that mean something to THEM.  Images that take them back to a moment when things were truly wonderful.  Yes, I could add elements to these images so that every single person who sees it knows the whole story behind it, but sometimes, when the end is near for our amazing furry companions, we don’t want to be reminded of the sad part of why they mean so much.

This image of Alfie was taken in York, a few months after he was diagnosed with Terminal Cancer.  It’s one of the last images we took of him that he doesn’t look sick.  He lost so much weight in the last year of his life that it was really obvious he was ill.  This photo doesn’t remind me of the Cancer that took him from us to soon, it reminds me of a perfect day that we took the Dogs on a road trip to York – and that means more than any award ever would.

Jako.  Looking at this image and taking away what i know, I already love it.  The sky was incredible that morning.  The beach was quiet and Jako’s colouring was MADE for these tones!  Jako had multiple cancerous growths and his 19 years of living meant his arthritis restricted his movement, but he had always loved the beach and his parents really wanted to do his shoot there, even if he only managed to lay in one spot.  We have multiple images of Jako’s Mum & Dad cuddling him, kissing him and strolling down the beach slowly with him, but this image will forever take them back to the day that their 19 Year old, frail pup Jako trotted up and down that beach for 2 whole hours with such enthusiasm that I wondered f they’d actually brought the right Dog with them!

Art is so subjective.  There are phenomenal photographer’s out there who have never won an award for the images they’re creating – but the art they bring into the world is JUST as valuable as one who has won THOUSANDS of awards.  There are also photographer’s who have won hundreds of awards, yet when I look at their images, I don’t feel anything (but where’s the Dog, I think to myself :p).  The best image on the planet, much like the best Dog in the world, belongs to the soul who falls in love with it x

« Why you must add San Diego to your USA travel plans! Hint: SealsWIN A COMMERCIAL PET PHOTOGRAPHY PACKAGE VALUED AT $8,500! »

no comments
link to this post
email a friend
Get in touch!